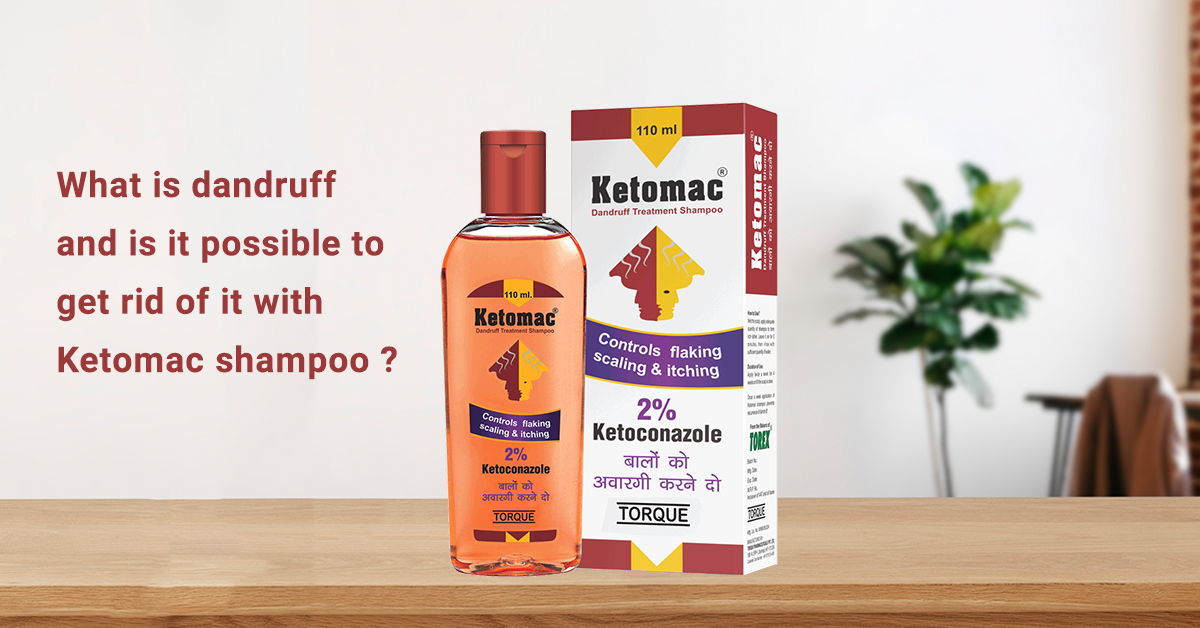 Dandruff is a common scalp disorder that occurs when skin cells get too old, die, and build up on the scalp. The main cause of dandruff is Malassezia yeast, which thrives in warm and moist environments. The yeast can overgrow due to various factors such as an unbalanced diet or gut bacteria. In cases of excess yeast, the immune system may react by triggering inflammation in hair follicles that surrounds the skin cell debris on the scalp.

Dandruff is a condition which causes the scalp to flake, itch and look greasy. It often results in people feeling embarrassed or tense.

Your scalp is made up of dead skin and oil glands, if the skin and oil glands do not work in unison they will produce excess oil leaving the hair and scalp saturated and greasy. Also, dead skin cells accumulate on your scalp because they are not being washed away. Washing your hair with harsh chemicals or shampoos can cause more damage to your scalp causing it to dry out or become very flaky.

Dandruff is not a serious condition but it can be annoying, many people have dandruff but do not realize it because they are not aware that there is something wrong with them.

Here’s how Dandruff can be classified

Dandruff can be classified by how severe the condition is; this is called a grade. There are four different grades of dandruff:

Grade I – This is the mildest form of dandruff and can be easily controlled by shampooing every two to three days. If not, it will become worse as time goes on.

Grade II – This form of dandruff requires more attention and care than grade I. It is a result of a yeast infection in the scalp itself so special shampoos have to be used in order to control it. People who have grade II dandruff should wash their hair every day or every other day.

Grade III – This form of dandruff will cause the hair and scalp to become very dry, the skin on the scalp can start flaking and it will be sensitive to touch. Special shampoos that have a moisturizing component should be used when taking care of grade III dandruff.

Grade IV – Grade IV is the most severe form of dandruff which results from fungal infections in the scalp. This can cause serious damage to your hair follicles which will damage your hair permanently.

What are the causes of dandruff?

Lack of sebum, an oil produced by glands in the skin and hair that lubricates hair and skin causes dandruff . Sebum is essential for protecting the skin from bacteria and other microorganisms. In cases where sebum production is low, follicles are particularly vulnerable to infection due to the absence of natural oils.

Low levels of zinc and vitamin A in diet can lead to folliculitis (inflammation) through lack of protection resulting from deficient sebum secretion by the glands. Nutritional deficiencies may cause hair loss due to damage to scalp follicles leading to patchy baldness on the head, face or scalp area causing dandruff problems.

Seborrheic dermatitis is an overgrowth of the skin cells that produce excess oils in the scalp, therefore causing dandruff problems.

Thus dandruff is not an uncommon condition as many people suffer from it at some point in their lives. According to a study conducted in 1994 by Kuznetsov, et al. in Moscow, about 70% of the population worldwide suffers from dandruff. While dandruff is a cosmetic condition, it may be a symptom of other skin diseases such as psoriasis or seborrheic dermatitis.

The features of seborrheic dermatitis are:

Red evenly distributed areas on the scalp and other areas such as elbows and knees.

Inflammatory redness on head and face caused by broken capillaries.

Hereditary factors also can play a role in dandruff. For example, genetics is believed to be the most important factor that makes some people more susceptible to developing dandruff than others.

The fungus “Malassezia” is a type of yeast that naturally lives on the skin, hair and scalp. Some factors such as low humidity, stress, poor diet and some skin products may cause an overgrowth of this fungus resulting in dandruff. Malassezia globosa is a lipophilic yeast species. In the normal flora of human skin, it is present in up to 90% of individuals. It is one of the most common causes of dandruff in non-Caucasians and can be found on the scalps of up to 96% of African children younger than 2 years old.

The number of oleic acids present in an individual’s sebum can determine their susceptibility to developing dandruff. For those with greater amounts of sebum and triglycerides, the Malassezia yeast population tends to be less aggressive.

A dry scalp may be due to some condition that reduces or blocked oil gland activity.

The exact mechanism through which these factors lead to dandruff is unknown.

Diet – A high intake of saturated fats and low dietary fibres may contribute to the development of dandruff.

Stress – Severe stress can result in the production of excess cortisol, a hormone released by the adrenal cortex, which is then converted to cortisone by enzymes in the adrenal medulla. Corticosteroid hormones are released into the bloodstream and travel to target tissues where they regulate carbohydrate metabolism, suppress inflammation, participate in immune reactions and influence certain endocrine activities such as vascular regulation and growth processes. The scalp softens easily under pressure resulting in frequent shampooing leading to dandruff.

Drugs – Chronic use of such drugs as steroids, acne antibiotics and other drugs may result in dandruff.

Fungus – Infection with “Candida” can be a cause of dandruff (yeast infection). When accompanied by poor hygiene, it may lead to an overgrowth of “Malassezia”.

Menopause – The hormone estrogen levels start to drop during menopause, leading to increased sebum production by sebaceous glands on the scalp and face. This can result in mild-to-moderate dandruff that typically disappears after menopause is over.

Ingrown hair – Every time hair is pulled back from the scalp, it could damage follicles which leads to the formation of a plug (“folliculitis”). This plug can become infected through poor hygiene. If severe, the infection may spread to surrounding hairs and cause an inflamed area known as a “pimple”, leaving the person with dandruff.

Scalp injury – Scalp injury from various causes including the dry and hot scalp, prolonged use of hair-dryer, chemical/dyeing treatments, tight hairstyles etc. can be a cause of dandruff.

Psoriasis – In Psoriasis, the skin cells (keratinocytes) proliferate rapidly leading to an overgrowth in the epidermis (overlap of two skin layers). This condition is associated with inflammation that results in scaling and silvery-looking patches on the skin surface. If severe, it may result in dandruff.

Seborrheic dermatitis – Seborrheic dermatitis is the most common cause of dandruff in adults. The condition occurs when an overgrowth of cells on the skin’s surface (keratinocytes) leads to flaky white or yellowish scales on the scalp, eyebrows, and face. Over time, it can also affect other areas such as ears, chest, neck, upper back, anus and skin folds.

The good news is that ketoconazole shampoo price India are cheap.

Ketoconazole is an antifungal that prevents your scalp from becoming infected with fungi, which can result in a condition called dandruff. Regular use of ketoconazole shampoo will make sure that you can keep this disease at bay while keeping your scalp healthy on the whole.

Ketoconazole is a proven hair loss drug that has been used for many years to treat the symptoms of men and women suffering from baldness. The drug works by regulating the production of a protein called lanostan, which is related to hair growth. If you suffer from thinning or bald hair on your scalp, you should use ketoconazole shampoo regularly to prevent further loss.

Ketoconazole is an antifungal that eliminates dandruff through the removal of a certain type of fungus called Malassezia. This fungus reduces hair strength, which can often lead to the loss of some strands during daily activities. It’s much more effective to prevent this from occurring than trying to treat it once you’ve already lost hair. If you want to restore the natural look of your locks and avoid future issues with dandruff, make sure you use ketoconazole shampoo regularly.

To prevent dandruff from occurring, you must maintain your immune system at the level it should be. When you use ketoconazole shampoo, certain components of the medicine will work to strengthen the chemicals in your body that fight off harmful microbes. Your immune system will be able to kill off fungal spores before they can cause any damage.

Ketoconazole is a highly effective antifungal that can work well even against the most difficult fungi for your immune system to fight off. This is why it’s so effective in preventing both dandruff and other fungal infections, including athlete’s foot and ringworm.

Oily hair is unattractive on anyone, and when you’ve got dandruff throughout your scalp, it can make things even worse. The best way to ensure that your scalp doesn’t become excessively oily is to use ketoconazole shampoo regularly. This can prevent dandruff from occurring, and it will also keep you from appearing greasy.

Maintaining your current pH balance in your scalp is not only important for maintaining healthy hair, but it’s also essential for preventing dandruff to occur. When your hair has too much of an alkaline pH and not enough of a neutral one, the results can be disastrous. Using ketoconazole shampoo will restore the perfect balance that your body needs to fight off both existing fungus and any new ones that have appeared recently.

Ketomac  is an anti dandruff shampoo ketoconazole india that has been given the green light by doctors to be used as a dandruff treatment. It’s even been approved by the FDA in some instances, which means it can be bought over-the-counter without a prescription! You should look for ketoconazole shampoo to treat either yourself or your loved ones if you or they have any issues with fungal infections.

Did you know that dandruff can be caused by serious health conditions such as diabetes?

While dandruff has many different causes and is often a symptom of other problems, one of the most common underlying causes should also be some of the last to go undiagnosed: diabetes. If you notice that your condition is worsening or that you’re suddenly suffering from a lot more dandruff than usual, it could mean that your blood sugar levels are too high. Consult with your doctor or even get a simple blood test in order to make sure your health is not the cause and this issue isn’t getting worse.

Those who suffer from dandruff are more likely to develop seborrheic dermatitis in the future.

Since both dandruff and seborrheic dermatitis are caused by excessive amounts of fungus on your scalp, it should come as no surprise that the two conditions share more than one thing in common. Those who use a ketoconazole shampoo to treat their dandruff are much less likely to develop severe rashes elsewhere on their scalp within a year of treatment.

While you may be interested to know how using ketoconazole shampoo can help improve your hair, it’s important that you be aware of some tips for using this drug correctly.

previousAll You Need To Know On Fungal Nails